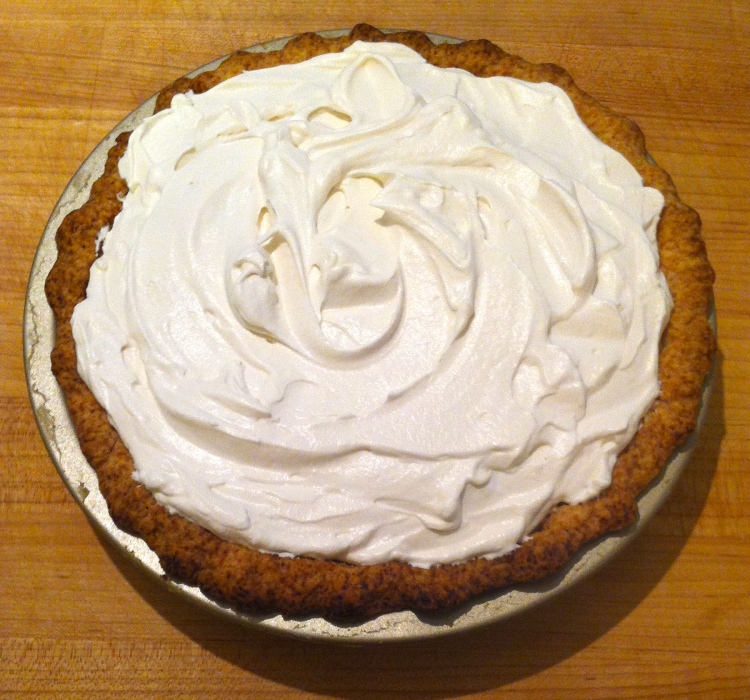 For the longest time I had been craving a slice of banana cream pie.  I know I could have probably satisfied that craving by heading to the local Village Inn, but why do such a thing when baking my own would much that much more satisfying?  Cream pies are, in my opinion, overlooked in the dessert world.  They’re finicky – what with the custard, and all.  They are time-consuming, as the crust must be pre-baked and totally cooled prior to being filled.  And often, they simply don’t turn out well; they may be too runny, too “stiff”, or the crust might not be hearty enough to stand up to the custard filling.  For whatever reason, I felt like accepting the challenge.  I love bananas and I love pastry cream, so what the heck, right?  Bring it on.

After many years of baking pies, I have finally gotten over my fear of making pie dough.  Really, it’s not that hard.  All you have to do is make sure your ingredients are really cold and you have to trust your instincts.  If, when you pinch the dough mixture between your fingers, it doesn’t stick together, add more water, but slowly.  Allow it to rest in the fridge, and then be confident in your rolling abilities; a floured surface is your best friend.

Once the pie crust is baked to a golden brown, it can sit cooling on the counter while you prepare the pastry cream.  The best advice I can give for making pastry cream is to have all your ingredients ready before you start, watch the heat on the pan, and whisk as though your very life depends on it.  Pastry cream can go from a liquid to a semi-solid in mere seconds, and if you’re not paying attention, you will burn it and have to start all over.  I don’t want that to happen, and I’m guessing neither do you.  I believe in you.  Be confident and trust in your instincts.  It’s just custard, after all.

After the custard has cooled, either chilled in the fridge or stirred in an ice bath, the pie can be assembled and eaten (finally!).  Yes, there is quite a bit of waiting for things to cool when it comes to cream pies, but trust that the cool time is essential.  You will be handsomely rewarded for all of your patience! 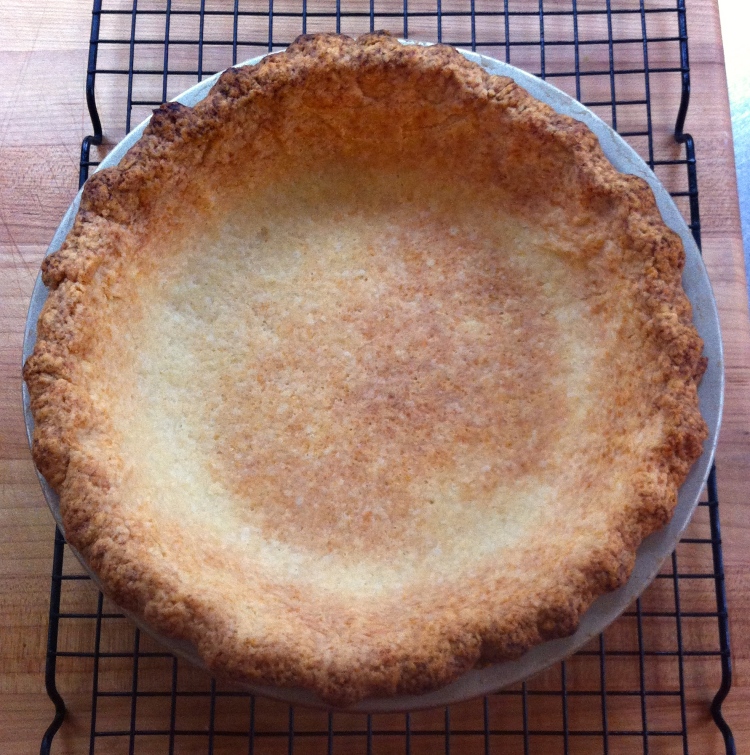 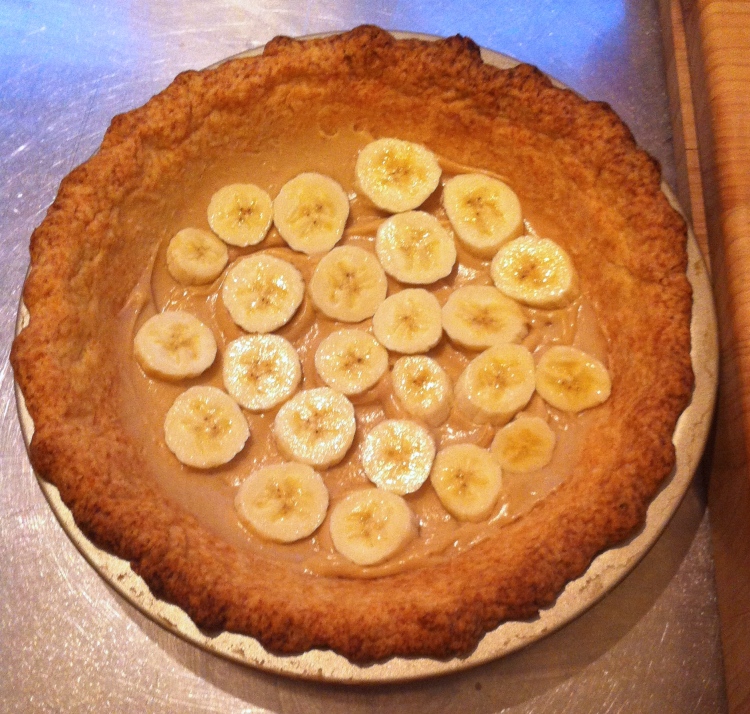 I adapted this recipe from Dorie Greenspan’s Baking – From My Home to Yours.  In my opinion, Dorie knows her stuff, and I can almost always rely on her recipes to be top-knotch.  However, I wouldn’t be me if I didn’t make a few tiny changes, right?  For instance, I always use lard and ice-cold vodka in my pie dough.  If you don’t have either, use non-hydrogenated shortening and ice-cold water.  Vodka is 40% pure alcohol, which doesn’t promote gluten formation, so your pie crust will maintain the flakiness everyone loves.  It won’t taste like vodka, so don’t worry.  It will, however, need to be chilled for at least an hour in the refrigerator.  Unless, of course, all of your ingredients are super cold and you work really quickly, then you can probably roll the dough out immediately.  I prefer to chill my dough then let it sit out for about 10 minutes before I roll it out and place it in my buttered pie plate. 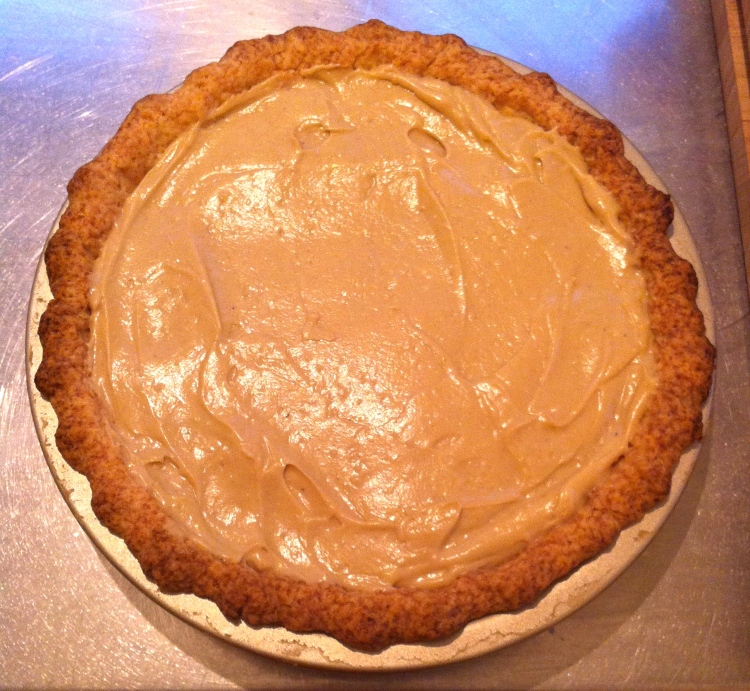 If you have the better part of a morning to make this pie, go for it.  Otherwise, much of it can be made ahead and assembled the next day.  The pastry cream can be made ahead and stored, covered, in the fridge for a couple of days, if necessary.  That said, I would urge you to eat this pie the day it is assembled; you won’t be sorry.

Remember, I believe in you!  Custards (pastry creams) can be intimidating, but trust in yourself!  Get in that kitchen and whisk up some custard!  You can do it!

For a 9-inch single crust:

For the whipped cream topping:

To make the crust:
In a food processor, add the flour, sugar and salt; pulse to combine ingredients.  Add butter and lard and pulse just until they are cut into the flour – don’t over-mix.  You want to be able to see the butter in the flour – you’ll want some the size of peas and others a bit smaller.  The butter will add to the flakiness of your crust.  While pulsing, add the vodka; give it few long pulses to evenly distribute the liquid.  Remove the lid and pinch a bit of the dough between your fingers.  If it easily sticks together, you’re good.  Turn dough out onto a work surface and gather it all together.  It might be a bit crumby, but that’s okay.  Do your best to gather it all together, then shape it into a disk about 5 inches in diameter and wrap it tightly in plastic wrap.  Place in fridge to chill for at least an hour.  When you’re ready to roll it out and place into your buttered pie plate, take the disk out of the fridge and allow it to sit for about 10 minutes on the counter.  This will take the chill off and be easier to roll out.

When you’re ready to roll out the dough:
Make sure you’re buttered 9-inch pie plate is ready.  On a floured surface, and turning the dough often to make sure it doesn’t stick, roll it out into a 11-inch circle (approximately).  Place dough in pie plate and trim off any excess until you have a 1/4-inch overhang.  Fold edges under and crimp (with fingers or fork).  If you think the dough has warmed up too much, place pie pan in fridge to cool dough for about 20 minutes.  Preheat oven to 400°F.

To bake crust:
Place prepared crust on baking sheet.  Butter the shiny side of a piece of aluminum foil and press buttered side tightly onto crust.  Fill foil with pie weights or dried beans and bake the crust for 25 minutes.  Carefully remove foil and weights, and if the crust is puffed, smooth it down gently with the back of a spoon.  Continue baking for an additional 10 minutes until crust is golden brown.  Transfer pie plate to a cooling rack and cool to room temperature before filling.

To make the custard:
In a saucepan, bring the milk to a boil.  Meanwhile, in a large, heavy-bottomed saucepan (I used a soup pot), whisk the egg yolks together with the brown sugar, cornstarch, cinnamon, nutmeg, and salt until well-mixed and thick.

Whisking continuously, drizzle in about 1/4 cup of the hot milk into the yolk mixture – this is called tempering.  By doing this, you will warm the eggs without curdling them.  Essentially, you’re prepping the eggs for the remainder of the milk – you don’t want scrambled eggs, do you?

Still whisking, add the remainder of the milk in a steady stream.  Place pan over medium heat and, whisking constantly, bring mixture to a boil.  Don’t rush this step – don’t turn up the heat thinking you’ll move things along more quickly.  If you do so, before you know it, your custard will be boiling and it’s a fine line between boiling and burned.  Don’t let that happen.  Make sure you whisk the entire surface of the pan, edges and all.

When mixture comes to a boil, continue to whisk vigorously for another minute or two, until custard is thick and creamy.  Remove from heat.  Whisk in vanilla and allow the custard to sit, untouched, for about 5 minutes, then whisk in the cubes of butter, stirring until butter is fully incorporated and mixture is smooth and glossy.  Transfer custard to bowl or glass storage container.  At this point you can place a piece of plastic wrap directly on the custard to create an airtight seal and place it in the fridge to cool.

To assemble pie:
Peel bananas and cut them on a slight diagonal into 1/4-inch slices.  Remove custard from fridge and whisk vigorously to loosen it.  Spread about one quarter of it in the bottom of the pie crust.  Top custard with half the banana slices.  Repeat, adding a thin layer of the custard and remaining bananas, the smooth the remaining custard over the last layer of bananas.

To make whipped topping:
In a stand mixer fitted with the whisk attachment, beat the cold heavy cream just until it begins to thicken.  Beat in confectioners’ sugar and vanilla and continue to beat until the cream holds firm peaks.  Remove bowl from mixer and, using a rubber spatula, gently fold in sour cream or crème fraîche.  Spoon topping over filling and spread evenly to the edges of the custard.  Serve, or refrigerate until needed.

my name is sara and i'm a lover of food, a home cook, and an everyday gourmet. i'm willing to try anything and share with you my stumbles and victories. swing by and take a peek. View more posts